Team Events arranges company outings and events for small and large companies throughout Switzerland. Plan directly with the organizer.

Alert! The yeti is threatening the Alps. In small teams you try to catch the snowman together with sniffer dog Joe, radio and net.

Already you have found the first traces: Huge footprints in the snow. They split up into different teams, receive networks and radios and swarm out. One group is accompanied by Joe, the dog with the fine nose. But it is not easy. The Yeti is clever and has survived many hunts. The only way to outwit him is to devise a clever strategy together.

The teams inform each other by radio if they discover further tracks or spot the yeti. Along the way, there are also tricky Yeti puzzles to solve and various off-road challenges to face: In Yeti modelling you have to show creativity and shape the Yeti out of snow. During the snow shooting you will take his hiding place under fire.

The yeti is set.

It's time. Joe makes a sound and soon the yeti is tracked down. Now it's time for everyone to communicate, surround and corner each other until you can throw the net over the snowman. The Yeti is defeated and can be triumphantly led away to the village.

At the Yeti party at the end, everyone has earned their mulled wine!
A lot of fun, networking, communication and a wild adventure in the wild are guaranteed at the Yeti hunt. And should the weather not play along, an equally exciting indoor yeti olympics is planned for you.

All of Switzerland and Germany 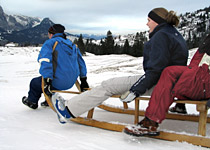 Experience an exhilarating horn sledge run with your team and indulge in a delicious fondue dinner after in a nearby restaurant. » 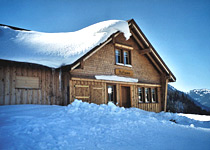 Experience the rustic charm of an alp hut, with its warm and cosy log burner ambiance. » 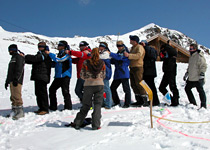 Book Winter Games in Davos. On request, we also organise a curling tournament. »

Customers' views on this offer