Team Events arranges company outings and events for small and large companies throughout Switzerland. Plan directly with the organizer.

When filming as a team, your team becomes a film crew and realizes its own films.

The Film Festival is a fun, varied and unique team event that can entertain even large groups in a creative and challenging way. The event is completely flexible in time and place and can be easily integrated into other activities.

At the Film Festival, your team becomes a film crew and realizes its own films in groups of 10-30 people. Each of the groups is led by a film professional. This professional coordinates the development of a short script and helps to realize the suggestions and ideas of the participants. He will assign the roles of the film crew in front of and behind the camera and help to find suitable locations.

In this way, spontaneous ideas of the employees become small scripts and the surroundings of the event are transformed into a film set.
Of course you have the possibility to give the film crews a theme to steer the films in a desired direction.

Once all the shots have been taken, your team can look forward to an aperitif or other supporting programme. The respective group leader devotes himself to editing the short film.

For the highlight of the event, everyone will meet again for the screening of the films created, the Film Festival. They will marvel at the works created and decide which film, which actor or actress will win the Film Award.

After the event, all films will be available online for viewing and downloading.

Discover the world of Swiss traditions

Acquaint yourself with playing the alphorn, flag twirling, yodelling, crossbow shooting, cow milking, spinning a coin and a lot more. » 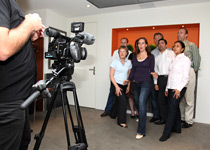 Produce with your team a photo-journalistic report or a promotional film – the professional shows you how. »

Carve great sculptures from large blocks of ice with your team. The sculptures are transient, but the fun is lasting. »

Customers' views on this offer